Roses are Red (White and Blue): Tips, Tricks, and Tidbits of Our National Flower

Roses are red, and sometimes they’re blue, how prepared for July 4th are you? June is National Rose Month and while the 4th might be right around the corner, there is still plenty of time to celebrate a flower more patriotic than meets the eye. From its distinction as the official flower of the United States to being the symbolic calling card for love, peace, and unity, roses are a flower bursting with intrigue and backyard garden potential. Here are seven patriotic facts about roses in celebration of the Fourth of July.

In 1959, it was proposed that the United States make the rose its national flower: however, this did not officially come to fruition until 1986. Since, the rose has become a symbol of love, country, and eternity as well as a representation of love for all mankind. Today, the White House Rose Garden notes the rose as an institution celebrating the founding of our nation, calling back to George Washington’s admiration for the flower.

The White House Rose Garden was created in 1913 by Ellen Louise Axson Wilson during her husband’s first term as president. In 1962, the rose garden was redesigned at the request of John F. Kennedy by Rachel Lambert Mellon. It is now adjacent to the East Garden and features prominent roses such as the Queen Elizabeth grandiflora, Pascali, Pat Nixon, and King Ransom, all of which serve as a gorgeous backdrop to news conferences that are held periodically in the garden to this day. Additionally, garden gnomes are placed throughout the garden every year on July 1st, representing how many presidents are alive at that moment.

The record for the world’s largest rose belongs to a California grown pink rose that measured a whopping 33 inches in diameter. As far as the world's largest rosebush goes, that title belongs to a White Lady Banksia found in Tombstone, Arizona. Spread across 9,000 square feet, the rose bush is owned by the Devere family, who have built a platform for visitors to admire the yearly blooming of their rose bush. The blooms only last for six weeks around Easter Sunday, so fans flock for a chance to see this amazing display of natural beauty in its gorgeous full form.

In 2002, the smallest rose, named the Overnight Scentsation, was taken into space to test the effect low gravity can have on the way roses smell. The rose was the first to grow in space, where it resided aboard NASA’s Discovery Space Shuttle in an Astroculture commercial plant growth chamber. This experiment led to a fascinating discovery: Overnight Scentsation ended up producing an entirely new and unique aroma not found in any earthbound roses. As a result, the study became the baseline for research on how to improve fragrances in consumer products like perfume.

The prestige of “the most expensive rose in the world” belongs to the Juliet rose, a specific variety of rose grown in 2006 by a breeder named David Austin. The rose took 15 years to grow and ended up costing Austin 5 million dollars in upkeep and growth. The Juliet is known for its large-headed bloom in comparison to smaller flowers, as well as its delicate pink hue.

Dark red roses have pigments so deep that they’re often mistaken as black. Originating from Halfeti, Turkey, these black roses that might seem like creepy creations from a halloween store are actually just very dark shades of red. Black Magic, as they’re more commonly referred, are noted for their unique foliage and strong smell. As members of the Guinee family, they’re larger than the average breed and serve as symbols of farewells and departure.

How To Grow Them

Roses are typically planted in the Spring and ready to bloom in the Summer, just in time for their special month. The soil they are planted in requires deep irrigation, while making sure to keep their foliage dry to help prevent disease. Roses of all types require regular pruning as well as regular feedings of Alfalfa, which provides the solid nutrition and vitamins your plants need for healthy growth.

Rose month comes but once a year, but can be celebrated in many different ways. You can hold a yard party and quiz each other on rose trivia, attend a Rose growing competition, or even pay a visit to the White House Rose Garden.

You can also flex your green thumb and try to plant your own rose garden. Keep your precious petals covered in cool months with a custom cover, or an insulated cover to keep their temperature in check so they are ready for next Spring. No matter which cover you choose, your new roses will be blooming with potential for years to come. 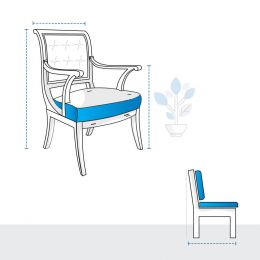 Categories
Recent Posts
The Thrill of the Grill: Grilling Styles from Around the World
Father Knows Best: A Gifting Guide for all the Dads in your Life
The Pride of Summer: How to Throw a Pride Month Party
Shades of Summer: 9 Ways to Celebrate Sunny Days and Warm Nights
A Stylish Season: Summer Inspired Patterns and Fabrics For Your Outdoor Furniture
Tags
© 2021 coversandall .com. All Rights Reserved.